From coffee to co-working and laser cutting to VR gaming, Helsinki’s Central Library Oodi is a masterclass in placemaking. Attracting 10,000 visitors a day, could this be the future of civic space?

You don’t expect to find a VR room in a library. Or a laser cutter. Or five top-of-the-range 3D printers, a fully equipped recording studio, a green screen filming room, a bank of sewing machines, a drum room and a dedicated Xbox zone. But then, there is no library in the world quite like Oodi.

Designed by ALA Architects and opened in December last year, the 17,250 sq m building in the heart of the Finnish capital of Helsinki notched up a massive 450,000 visitors in just one month. How? By reinventing the power of community space for the modern age.

A feat of exemplary placemaking, Oodi really is for everyone. And there is a spiral staircase to prove it.

“This is a piece of art as well as a way to move between the three floors,” says Severi Hirvi, one of Oodi’s librarians, as he looks down the monochrome stairwell to the circular segment of café visible on the ground floor below. “The words printed on the walls are all suggestions sent to us by local people and they represent who this library should be for, from pansexuals to retirees. And the word right at the top there, ‘kaikki’ means ‘everyone’.”

The piece, created by visual artist Otto Karvonen, brings together these words, as a dedication to the library’s users. And there are many users. With an average of 10,000 visitors a day, Oodi is already fulfilling its role as a space anchored by its promotion of inclusivity.

“Oodi is a truly free and open place in the middle of Helsinki,” says Hirvi. “It is open 14 hours a day and will only be closed for nine days every year, so it is easily accessible and can be used by all the citizens for work, entertainment and learning.”

From the restaurant, day care service and display of upcoming government plans and proposals at ground level to the modern facilities – including that Xbox zone – on the second floor, this is so much more than a library.

Not that the traditional element of the building has been forgotten. Far from it. Up on the top floor, bathed in natural light with 360 degree views over Helsinki, 100,000 books are stacked on free-standing bright, white shelves. Dubbed ‘book heaven’ it is easy to see why people love to come here – not least because this is where the building’s architectural prowess comes into its own.

The swooping structure, clad in planks of Finnish spruce timber, creates an undulating roof that is mirrored on the inside of the building, dipping in and out of the top floor space punctuated by huge, circular skylights. It is on this level that visitors have access to a balcony which has been purposefully built opposite the Finnish Parliament House. “This allows people to look over the government on a level,” says Hirvi. “Eye to eye, rather than from ground level looking up.” 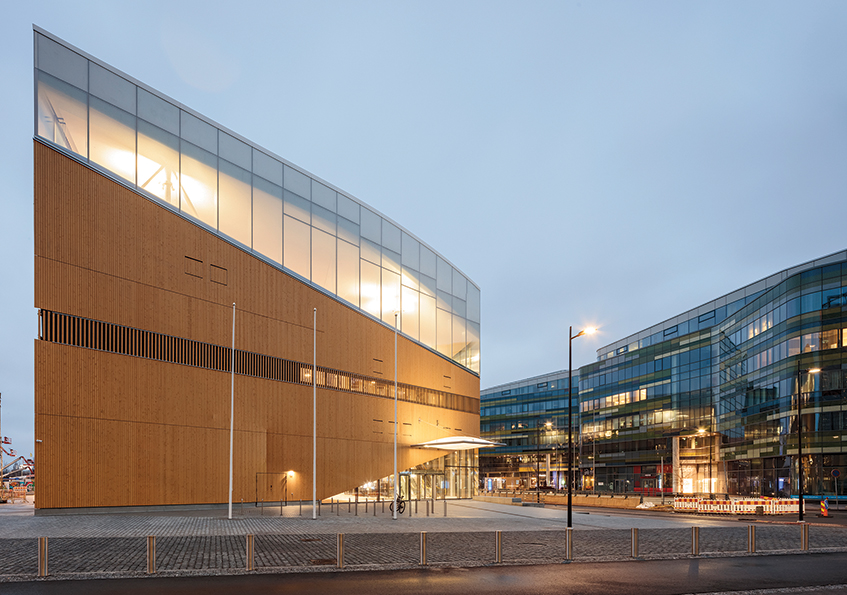 And this is a design point heartily embraced by those in Finnish politics. “The new Central Library Oodi was a gift to mark the centennial celebration of Finland’s independence,” says Jan Vapaavuori, mayor of Helsinki. “It manifests the core values of the nation – commitment to modern democracy, equality and openness. A contemporary architectural symbol Oodi is also a modern community centre, a place for people to come together, share experiences and learn.

“It is fitting, that one of the most prominent sites in Helsinki was dedicated to Oodi. Positioned across from the Parliament it communicates the balance between formal and soft power. Oodi is also an important step in the development of Helsinki as a city of culture, arts and engagement.“

Much of the building’s openness stems from its design which was chosen following an anonymous international competition in 2013 that attracted 544 entries.

The winning design by Finnish practice ALA Architects is based on the concept of “an inhabited bridge” which sees two huge steel arches spanning over 100 metres pull the structure together. Visible on the second floor on the inside, these arches are an integral part of the library’s distinct style. They create a fully enclosed, column free public entrance on the ground floor while on the middle floor the multi function rooms are arranged in and around the nooks and corners between the trusses of the bridge structure. The top floor sits above the arches with the books arranged under the wave-like white canopy.

“Oodi is a beautiful building and the Fins are very proud of it,” says Elina Grigoriou of Grigoriou Interiors, who is currently working on a design project with the University of Helsinki. “The main focus is on the fact they have actually built such a public space. The value of human connection and a good life is what dominates in much of Finnish thinking in a way we don’t see so much in other countries.

“The mentality around design and project decisions is very healthy in Finland. They don’t waste time squeezing projects down to an acceptable cost when they know it will provide a reasonable quality of life in return.”

This thinking, and indeed investment, goes beyond the design. Oodi has been carefully considered right down to the last detail and stocked full from the outset with services created to give back to the community.

The shift in priorities away from storage of a large static collection of books and the use of book-sorting robots meant Oodi’s librarians and designers were able to reconsider the role of the library. This fuelled the decision for only a third of the space to be used as a traditional library. The resulting library is an indoor extension of public space, a civic “living room” in addition to access to the books.

Most of the less traditional facilities at Oodi can be booked online free of charge. The bulk of the modern services are on the second floor, including the games and recording rooms, and are located along with co-working and flexible office space.

It is this floor too where it is evident how much trust has been put in the visitors. Access to expensive equipment including banks of computers, industrial sized printing machines and those 3D printers and laser cutters means that Oodi goes way beyond offering space for start-ups. It offers the infrastructure required by many to launch a fledgling business. And it offers all this for free.

“Small companies and start-ups can definitely benefit from access to more than just an office,” says Hirvi. “Here they have events spaces, studios, maker-space services.” And what if an expensive piece of equipment is broken? Hirvi shrugs. “This is a place for the people. We have to let them get on and use it.

“We are here to help people learn. Not get in the way or stop them accessing the building or the equipment. If the future and technology seem intimidating, at Oodi citizens can throw away their fears, learn the new language and create the future instead of just watching the world change around them.

“Oodi is a place where you can see your friends, create art, read, relax, learn. Whatever you want. Oodi is a gift from the city to the citizens.” 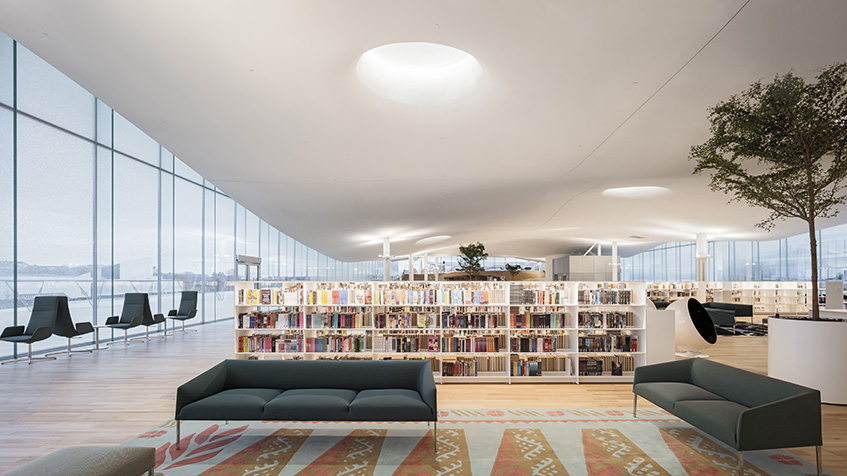 How Oodi has rewritten the rule book on civic placemaking

To send feedback, e-mail emily.wright@egi.co.uk or tweet @EmilyW_9 or @estatesgazette

Europe is predicted to attract almost €40bn, making it the largest... Read more >

We are moving towards a city where it is the building that matters more than... Read more >

Unless you have pre-sold, anyone who has bought anything in the past two years... Read more >

EG needs your help shaping the future of our residential data service.

Our mission is to support you in ﬁnding and assessing investment and development opportunities faster.

Help us do just that by taking part in an exclusive product testing session.