Occupiers are increasingly favouring connectivity over location, according to Radius Data Exchange and WiredScore data. So what does that mean for the future of London offices?

There are few things with more power than digital performance when it comes to adding to the value of a building. And now it appears that connectivity has crept higher up the list of priorities for occupiers than a long-standing factor that has been so crucial: location, location, location.

Radius Data Exchange figures show that occupiers are likely to pay 5% more in rent for London office space with strong connectivity than for similar space without a guarantee of high digital performance.

Looking at 65 office buildings across central London with at least a certification from WiredScore, we matched all of those buildings with similar neighbouring premises without an accreditation for connectivity. Comparing rental data on new deals over the past five years between them showed that, on average, space was being let for 4.7% more in what we will call the “digital buildings”.

Crucially, the age of the premises is removed as a skew factor in this, with more than half of the comparable buildings being either the same age or younger than their WiredScore-rated counterparts.

Certain areas across London appear more sensitive to this phenomenon, with the City Core and West End not showing a great deal of variance in rental tone, seeing just a 0.3% and 1.6% difference in average rent respectively.

In the maturing areas, however, the contrast is much starker. In the City Fringe, digital buildings command rental values that are 9.6% higher than the comparative premises; and the highest variance comes on the South Bank, where a 15.2% bump was seen.

Looking at the tenant composition of digital buildings, it’s not surprising to see that tech, media and telecoms companies take the largest share, with 30%. In non-digital premises, that share decreases to 14%.

Traditionally, TMT companies have preferred cheaper office space than their counterparts in other dominant occupier sectors – Radius Data Exchange figures indicate that typical rents on new deals for TMT tenants are 26% below those for financial occupiers, and 8% below those for tenants in the professional sector.

Finance and professional firms make up the lion’s share of occupation in the non-digital comparison buildings, commanding 21% and 19% of the let floorspace respectively. Surprisingly, serviced office operators command a larger share of occupied space in non-digital buildings than in those with a connectivity rating.

Therefore, removing both the age of the building and the type of tenant attracted to the premises as potential skew factors, the digital buildings can be said to have performed exceptionally well in attracting higher rental tone.

Connectivity and technological enhancements are clearly key factors in occupier decisions – as reflected in the CBRE 2018 EMEA Occupier Sentiment Survey, which indicated that a focus on improving user experience and wellness driven by the deployment of technology will be a strong focus for businesses moving forward.

Some 62% of respondents to the survey said they planned to increase their investment in real estate technology over the next three years, and it is widely anticipated that this trend will continue when the next set of occupier survey results arrives in April this year. 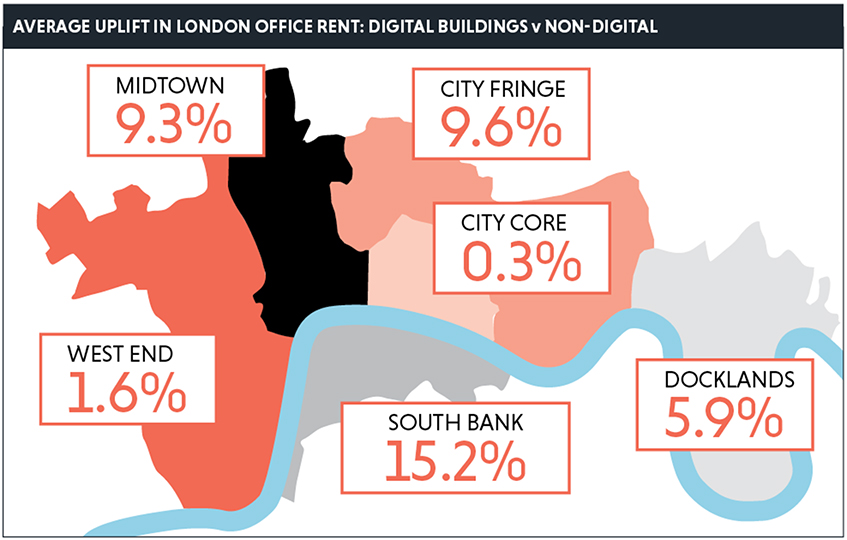 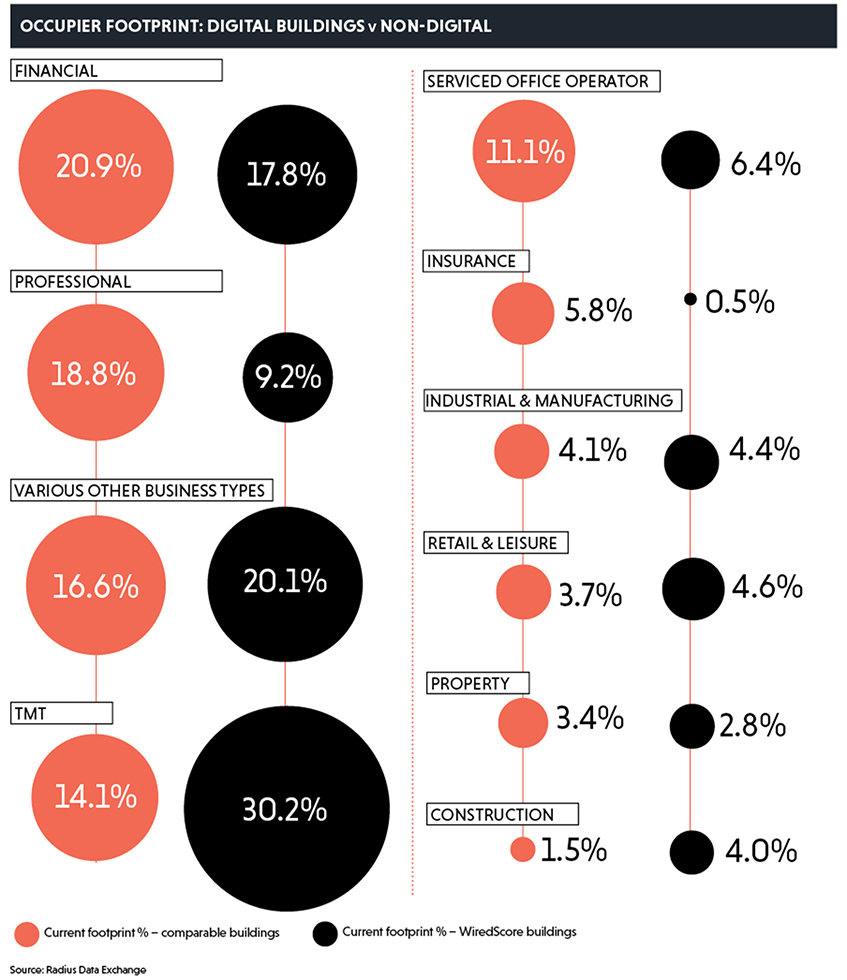 Europe is predicted to attract almost €40bn, making it the largest... Read more >

We are moving towards a city where it is the building that matters more than... Read more >

Unless you have pre-sold, anyone who has bought anything in the past two years... Read more >

EG needs your help shaping the future of our residential data service.

Our mission is to support you in ﬁnding and assessing investment and development opportunities faster.

Help us do just that by taking part in an exclusive product testing session.